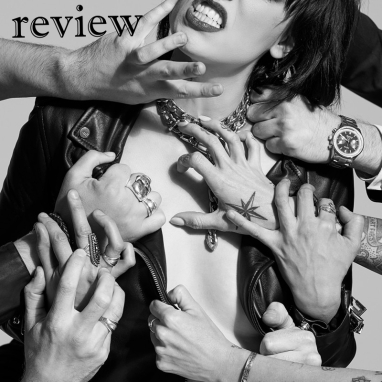 Halestorm promised a lot with Vicious and at a first glance they seemingly failed to deliver. Vicious is a lot different than their mega hit The Strange Case Of. It is even different than their last record Into the Wild Life. Vicious isn’t saturated with fan pleasing songs that will dazzle the listener. Rather, it’s an album from the band-members-of-Halestorm, not the stereotype-of-Halestorm created in the wake of their Grammy win.

The story behind Vicious is rather interesting, and certainly worth noting before diving into the album. Otherwise, I feel this album will be examined unfairly. On my first listen through I didn’t care for the album nearly as much as I did after learning about how the album came to be. In an interview, Lizzy Hale told Blabbermouth:

“When we settled down and listened to a lot of the songs that we were writing, we realized that we didn’t really like any of them. It just sounded very much like we were trying to make everybody happy, and try to fix everything and please everybody but ourselves, so we threw a lot of those things away and then ended up starting from scratch”

I support this attitude. I don’t like when bands are coerced to pump out albums they don’t really feel a connection with. I feel like the emotional attachment between and a band and their music is utterly important. Additionally, I applaud musicians for taking a step outside of their comfort zone. This pushes them, as artists, to bend the limits of their sound. While scary, this can produce wonderful new music.

Musically, this is my least favorite Halestorm album. It doesn’t tickle my fancy like their other records, even Into the Wild Life. That being said, I don’t think it’s a bad album. It’s just not something I wholeheartedly enjoy. Personally, the record wasn’t a total wash out, as there are some good songs on Vicious that should appeal to a wide variety of people.

My favorite part of Vicious was the vocals. I found this conclusion surprising, as I hardly ever prefer them to the instruments. Perhaps I don’t usually listen to bands with phenomenal vocalists. However, Lizzy Hale’s voice is much bigger on Vicious than on the band’s older albums. The closing track, “The Silence” is a perfect example. An acoustic guitar strums away while Hale belts out nostalgic lyrics, showing off the range of her voice. To put it bluntly: her vocals glow far above the rest of the band.

Vicious is not like any other album Halestorm has released. The most obvious difference occurs in musical styles. There are some odd styles the band incorporated on Vicious. “Skulls”, for example, could be mistaken for a rap-rock tune. Lizzy Hale kind of approaches rapping throughout the song.

Vicious discusses some great themes. Lizzy Hale said the record was about “ownership” in her interview with Blabbermouth. I agree, although I would have said something a little different. I took the album to be about cultivating the unique and beautiful individual within. Overall, the album is very empowering. The title track states:

“What doesn’t kill me, Makes me vicious, I’m not gonna break, I can take all that you can give, This is survival, I’m the sickest, I am not afraid, bring the pain”

As always, the singles released before the album dropped are great. They’re catchy rock numbers that sound like they will get ample air time on the radio. But I wouldn’t start there.

My favorite song on Vicious is the closing track, “The Silence”, so naturally I think it’s a good place to start. This is a slower track, as I mentioned. There are, however, plenty of upbeat and heavy songs on the album. “Killing Ourselves To Live” is a heavy tune that features a killer, and lengthy, guitar solo. “Skulls” may be a little weird, as I wrote above, but it is a must listen to; partly because of the oddness of the arrangement and partly because it’s a decent rock song.